governor, was born at Surat (India), the son of Dr James Mackenzie and his wife Louisa Wilhelmina. Mackenzie must have joined the navy young, for he was awarded the Navarino clasp on his naval general service medal, so he must have been present at that battle in October 1827. He passed for lieutenant on 7 April 1830 and was promoted commander on 29 April 1847. In 1853 he was serving in the coast guard, but during the Crimean War from 1854 to early 1856 he served in the Agamemnon in the Black Sea. He was promoted captain on 5 June 1856 and placed on half pay and by 1862 he was on reserved half pay; retired captain 1 July 1867. 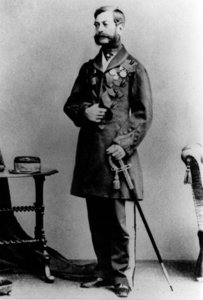 Mackenzie was one of a number of naval captains considered for the governorship of the Falklands, and was appointed governor on 24 September 1862. He arrived in the colony with his wife Martha Catherine, via Río de Janeiro on board HMS Satellite on 22 November and was sworn in on Monday 24 November 1862.

From contemporary source documents Mackenzie seems to have governed calmly and quietly during his four year. Surprisingly he receives little mention in any of the standard books on Falklands history but, although a number of significant events and incidents took place during his period of office, he was personally involved in scarcely anything more dramatic than a furore over the seating arrangements in Holy Trinity Church. Indeed in a letter to the secretary of state about Bishop STIRLING, who had berated the Governor for not mixing more with the people of Stanley, Mackenzie wrote: 'I had found such a system of lying and quarrelling to prevail among them [the people of Stanley] that I found it prudent to withdraw'. 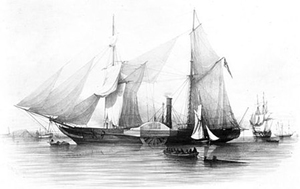 Following instructions from Mackenzie's predecessor, Governor MOORE, the Falkland Islands Company (FIC) had been prosecuted in Stanley for illegally killing wild cattle without the Governor's permission and had been fined £1,080. The Company had appealed to the Privy Council in Britain and, although the appeal had not yet been heard, in January 1863 Governor Mackenzie received instructions from the the secretary of state to repay £830 to the Company, reducing the fine to £250. Finally in August 1863 the Privy Council gave judgement in favour of the Falkland Islands Company.

In 1864 Mackenzie was at last able to make a tour of the Islands when Rear Admiral Warren, commander-in-chief on the Brazil station placed a small steamer, HMS Stromboli, at his disposal and from 16 to 27 March together with the colonial secretary, PYNE, he managed to visit every Camp station. He reported to the Duke of Newcastle that in his opinion 'the whole country, particularly the West Falkland and adjacent islands, is peculiarly valuable for pastoral purposes and in the meanwhile I shall endeavour my utmost to encourage sheep farming, which I am convinced will eventually prove a source of wealth to the Colony'. 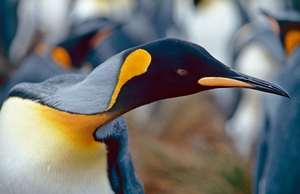 In July 1864 it came to the Governor's notice that a scheme had been organised to destroy the penguin rookeries at Volunteer Lagoon and an organised party travelling there in several boats indiscriminately slaughtered the 'animals'. Fearing wholesale destruction of penguins throughout the colony to meet the demand for valuable penguin oil on the London market, the governor had a bill drafted to protect the penguins on Crown lands or lands leased from the Crown. The ordinance was passed by LegCo in September of that year (which imposed a maximum fine of £100 and the confiscation of any boats used), but ran into problems with the Colonial Office, who considered a fine should not exceed £5 for each day's slaughter plus £1 per bird killed: the ordinance had to be suspended. As the governor pointed out in a letter to the Colonial Office in October 1865, a party of three men without using much exertion could easily kill £1,500 to £2,000 worth of penguins in one day!

For years Falkland Islands governors had complained about the carriage of despatches and the mails between England and the Falkland Islands. The problem was solved, at least for the time being, by the purchase in October 1863 of the 84 ton yacht Foam by the British Government Emigration Board, for the carriage of mails between the Falkland Islands and Montevideo. The yacht duly arrived at Port Stanley after a voyage of sixty days under her skipper, Captain Smithen. The Foam, making six return passages annually, maintained the Falklands mail link via Montevideo without incident until 1872. 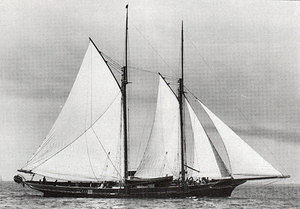 Members of ExCo expressed their opinion that after the four years administration by Governor Mackenzie 'the Colony seemed at last to have taken a start on the road to improvement', that the rent roll had nearly doubled (instead of nineteen grazing stations there were now thirty-seven), that imports and exports showed a very satisfactory condition of trade, that there had been a great increase in the number of shipping visiting the port for repairs and provisions and, above all, there was the establishment of regular bi-monthly mail communication with Montevideo by means of the schooner Foam.

In 1866, Mackenzie was appointed lieutenant-governor of St Christopher and on 4 July he left the Falklands on HMS Spiteful which had arrived at Stanley with the new governor, William ROBINSON.

On 1 January 1875 Mackenzie was promoted rear-admiral on the retired list and he died on 25 February 1879.