businessman, was born in Liverpool on 24 June 1941. His parents were George Spruce and Vera Clarke, and he had two siblings – Kenneth and Cynthia. After education at Holt High School in Liverpool, he began his working life as an accountant at the Crawford Biscuit factory in Liverpool.  When Spruce saw an advert in the Daily Telegraph for a job with the Falkland Islands Company in 1963, he applied and signed an initial four-year contract. He began working for the Company on 28 August 1963. In total Spruce worked for the FIC for thirty-eight years – nineteen years as the Stanley general manager and twelve of these years as a director of the Company. He retired in 2001. 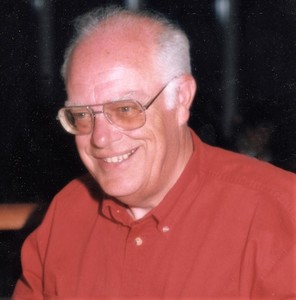 In May 1971 Terry Spruce married Joan SPRUCE (née Felton) at the Cathedral in Stanley: they have one son, Mark, born in 1979.

During the Argentine occupation Spruce sent his wife and son firstly to Darwin to stay with Brook and Eileen HARDCASTLE. Later they moved to North Arm to stay with Lyn and Tony Blake until liberation.

Spruce was due to take over as Stanley general manager of the FIC from Henry Millar (Harry) MILNE on 8 April 1982 but in view of the Argentine invasion it was mutually agreed between Milne and Spruce that this would be delayed until the Islands were liberated. Both men were quite convinced that liberation would only be a short matter of time.

Spruce became Stanley general manager of the FIC in September 1982. His tenure coincided with major changes in the Islands and in the Company. He managed the transition required during the sale of the company farms - beginning in the early 1980s with Green Patch, and completed in 1990 with the remaining farms being taken into government ownership and the creation of Falklands Landholdings.  These land reforms were long overdue and brought about radical changes in the farming economy, and Spruce required great skill and patience in managing the changes. As a result of the disposal of the FIC farms, the Company became a major player in the service industries of the Islands. Much of the credit for the transformation of the FIC into its present successful form is due to the skills of Spruce. 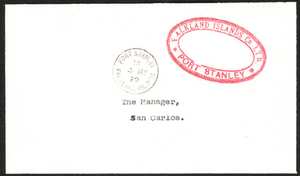 During the Argentine occupation in 1982 Spruce played a leading part in the civilian response to the situation. After his family had departed to Camp, he slept in the West Store office. He helped establish a Civil Defence Committee and to produce a register of people still living in Stanley. He oversaw the issuing of emergency kits (consisting of first aid supplies, torches, kerosene lanterns and new plastic bins used for storing water) which were made up by the FIC and issued free to any household in Stanley requesting one. His main task was to work with the Argentine authorities – principally Air Commodore Carlos Bloomer Reeve and Captain Barry Hussey (who subsequently became an Admiral). As well as raising official complaints with the occupying forces, Spruce was concerned to protect the food warehouse for the civilian population and to ensure that the FIC slaughterhouse and butchery continued to provide meat for the people of Stanley. Except for one day’s delivery, fresh meat was supplied throughout the occupation as normal. Spruce ensured the safeguarding and protecting of the wool warehouses where clients’ bales of wool were stored awaiting shipment to overseas markets.

Another major challenge he faced as Stanley general manager was the virtual re-building of the FIC from the effects of the Argentine occupation. Farm buildings, farm houses and the general infrastructure of the company had to be completely restored and refurbished. 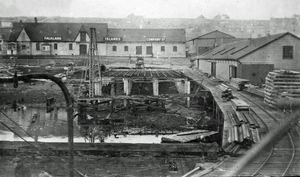 Towards the end of Spruce’s time as Stanley general manager much greater emphasis was put by the FIC on to servicing the deep sea fishing industry and assisting with the growing tourist industry. This culminated in the building of ‘The Capstan’ gift shop, which was built on the old FIC slipway on the foreshore of Stanley.  The credit for this highly successful project is, in the main, due to Spruce.

During his time in Liverpool Spruce was a member of the Boy’s Brigade, and on his arrival in the Falklands he continued this connection. Initially he just helped with the Brigade and he then ran the junior section until 1980 - eventually running the whole group until 1982. 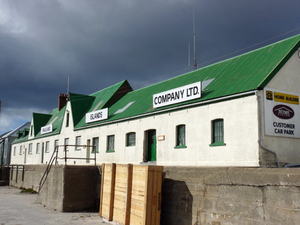 Spruce is a keen and knowledgeable philatelist (like his predecessor Harry Milne) and he is responsible for the one of the most sought-after provisional issues by philatelists in modern times. In 1972 the ½ and 1p local rate stamps in the Islands were running low and the FIC, who were the principal users of the 1p, returned its stocks to the Post Office on the understanding that the company was authorised to use its handstamps to frank its postal correspondence to an equivalent value. In the event 1,824 oval handstamps and 482 rectangular West Store handstamps were used.

Spruce was the founding chairman of the Malo Angling Club and for some years he was the Secretary of the Stanley Sports Association. He was appointed a JP in 1985 and awarded an MBE in 2001 – which was the year of his retirement.

Since 1851 there have been fourteen colonial managers and four Stanley general managers of the Falkland Islands Company.  Few of them have seen such tumultuous changes in the Company’s fortunes and operations as Spruce. Throughout his nineteen years as Stanley general manager he dealt with many challenges and demands with a mixture of shrewd business acumen, firm leadership and understanding. He commented: “I had a great team working with me”.