visiting economist, was born on 2 July 1890 at Calne (Wilts), the son of Ernest Guillebaud, an Anglican priest; his mother Mabel Marshall was sister to the economist Alfred Marshall. Educated at Repton School, Manchester University and St Johns College Cambridge, he was awarded a double first in Economics and received the Adam Smith Prize in 1915. He was elected to a fellowship at St Johns in 1915 and was a lecturer in economics there from 1926 until 1945 and director of studies in economics from 1935 until 1957. Guillebaud married Marie-Thérèse Prunner (born in Austria and known as Pauline) in 1918; they had two daughters Philomena and Claudia . He maintained that his name should be pronounced to rhyme with 'keel row'. 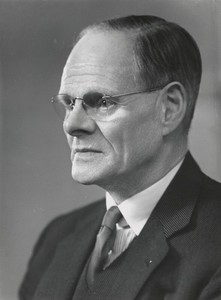 Between the two World Wars, Guillebaud led a quiet life as a university don for nearly twenty years, but in 1939 he entered public life as a government advisor on economic affairs, where the hallmark of his meticulous work was the lucidity of his decisions and explanations. Guillebaud gained a reputation of being a fair-minded man who gave unbiased advice and who knew that the truth can be unpopular. He became a specialist in wages arbitration disputes and conciliation, and also member of many industrial disputes tribunals. He was described as 'the apostle of goodwill between employers and the employed'.  He conducted an economic survey of the sisal industry of Tanganyika {Tanzania} in 1967.

Guillebaud came to Stanley on 4 March 1967 at the personal invitation of Governor HASKARD, appointed to conduct an economic survey of the Falkland Islands. He left the Islands on 9 April 1967, and his report was submitted on 30 June 1967. He stayed on ten farms during his stay, and he consulted widely - including with FG MITCHELL, the managing director of FIC. His report dealt with many economic issues - especially the prospects for diversification of the Islands' economy, the national income, the standard of living and levels of remuneration. He also wrote extensively on public finances and population trends. 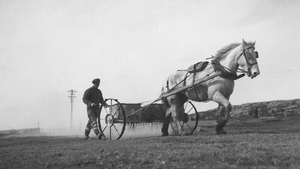 Writing as an economist with no special knowledge of the technical problems of sheep farming, I must rely mainly on the opinion of experts who have made detailed studies of the system of sheep husbandry as practised in the Falkland Islands.

He accepted the findings of Hugh MUNRO and William DAVIES concluding that from 1909 to 1963 there had been no expansion in the total amount of exported wool produced in the Islands though he acknowledged that there has been a considerable rise in the average yield of wool per sheep - an increase of 22% in the period 1944-1963. He found not just an absence of real improvement, but also a gradual deterioration of the pastures under the largely prevailing system of uncontrolled grazing, with a consequential decline in the carrying capacity in terms of sheep on the farms. The increase in the yield of wool per sheep was undoubtedly due to improved methods of breeding. 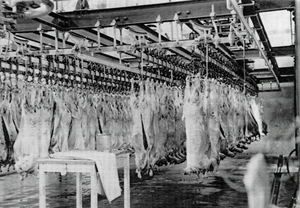 The interior of the Ajax Bay freezer...

Guillebaud asked the familiar question: 'what can be done to improve the fertility of the soil, and so enable a larger number of sheep to be carried successfully?' From the work of Munro and Davies, he drew three conclusions: first, that there was impressive unanimity of expert opinion that sub-division of the Camps was an essential prerequisite to any improvement in the condition of the grasslands; second, that all the writers since 1924 were agreed that the fertility and carrying capacity had been deteriorating and was continuing to do so; third, that with a few exceptions, remarkably little progress had been made during the period 1920-1960 towards sub-division and fencing of pastures, and other practical measures for conserving or improving the fertility of the soil.

Guillebaud sought to explain why this situation had occurred; he understood fully the problems caused by low wool prices before 1939-1945, and that since the end of World War II profits had been used to build up reserves or in much needed, but expensive, improvement in the housing of the farm employees. 'But this notwithstanding they could and should have done more to sub-divide their large enclosures.' He commended the re-seeding efforts of various farms, but was disappointed by the overall record of the FIC farms which were still 'being ranched in the old way.' The FIC strongly disagreed with his conclusion; Guillebaud conceded that while he was writing his report FIC were resuming re-seeding experiments on some farms and commented that 'this sort of experiment, which might produce instructive results ... shows a very welcome, if belated, change in the policy of the Company'.

The errors of the disastrous Ajax Bay freezer scheme were outlined in Guillebaud's report:

It cannot be said that anyone emerged with much credit from this sorry story ... neither Government which was reluctant to accept advice or criticism from within the islands; nor the farmers whose co-operation left much to be desired; nor the Colonial Development Corporation which made very bad mistakes in the planning, construction and administration of the scheme. 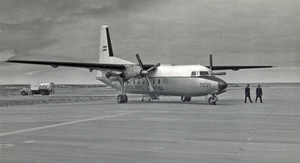 Significant improvements in education on the Falkland Islands were required and that larger contributions from government to off-set costs of the further education of children outside the Islands were needed; that the establishment of tenant farms was necessary and that other ways should be found to give employees some financial interest in the farms; that reassurance should be given to Islanders about the political future of 'their country'; that the Government should subsidise the passage of wives and families of men recruited to work on the farms, and that government should subsidise the cost of improving the accommodation for married people working on farms; that sheep farm owners should greatly improve their methods of recruitment; and that if the labour situation in Stanley did not rapidly improve, contract labour from Chile should be obtained.

It is striking that Guillebaud, despite being commissioned to report on the economy of the Colony, concerned himself with a wide range of social issues, with the reasons behind the steady decline in the human population of the Islands, and with how this could be halted. He finishes his report in a typically far-sighted manner: 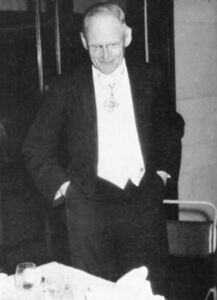 I wish to express my personal belief and faith in the viability of the Falkland Islands' economy. But resolute action will be needed if a situation, which today is merely somewhat precarious, is to be prevented from reaching a stage when it becomes irreparable. It is not too much to say that the whole future of the Colony is now at stake.

Guillebaud was created a CBE in 1948.