naval surgeon, was born in Runham, near Great Yarmouth, Norfolk, the son of Surgeon Robert McCormick, RN, from Co Tyrone. It was during his boyhood wanderings that he became interested in natural history. In 1823 he was appointed assistant surgeon in HMS Queen Charlotte after little over a year at the United Borough Hospitals of Guy's and St. Thomas's, London, where he obtained his MRCS diploma. He visited the West Indies for the first time in 1823-25, which gave him a dislike of small ships and the West Indies station. Two years later, in 1827, he took part, as assistant surgeon of HMS Hecla, in Captain WE Parry's attempt to reach the North Pole. 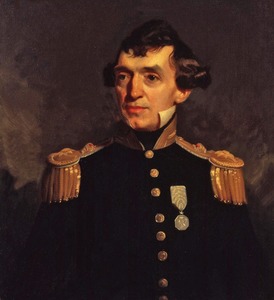 In July 1831, he was appointed surgeon in HMS Beagle, Captain Robert FITZROY, but returned to England the following year, being 'invalided', but possibly jealous of young Charles DARWIN. As surgeon, with responsibility for geology, in HMS Erebus during the celebrated scientific Antarctic circumnavigation, under the command of Captain James Clark ROSS, McCormick got on well with Joseph Dalton HOOKER, the assistant surgeon, nearly twenty years his junior, dividing the responsibility for natural history to McCormick's satisfaction. During the expedition, Ross named Cape McCormick on the coast of Victoria Land, Antarctica, after him. In Hobart, Tasmania, McCormick had met Sir John Franklin, the lieutenant-governor, and Lady Franklin. He was therefore particularly concerned at the disappearance of Franklin, commanding Erebus and Terror, during the last of the naval voyages in search of the North West Passage, 1845 - 48. In 1852, he was appointed surgeon in HMS North Star during the search for Franklin, from which ship, with Sir Edward Belcher's permission, he took the boat Forlorn Hope with six men in August and September 1852 up Wellington Channel, but found no trace of the missing expedition. He returned to England in the Phoenix and saw no more active service, being promoted deputy inspector for hospitals and fleets in 1859 and put on the retired list in 1865. His portrait by Stephen Pearce, 1853, was among those of the Arctic officers commissioned by John Barrow, now in the National Portrait Gallery. He had spent long periods on half pay during his naval career, some of his spare time being taken up in walking tours and attending lectures. The Antarctic Skua Catharacta skua maccormicki was presumably named after him, as was the Tartary Oak Quercus mccormicki, which illustrates the first page of his autobiography at the end of the second volume of his book (see below). He died at Wimbledon (where his house, 'Hecla Villa' still stands) on 28 October 1890.

McCormick twice visited the Falkland Islands, both times in HMS Erebus. She anchored with the Terror in Berkeley Sound on 6 April 1842. 'The land here', wrote McCormick in his book, 'has very much the aspect of the Shetlands or the Orkneys, in undulating slopes of brownish-green peat, and interspersed with tufts of tussock grass'. The small Government House, occupied by Lt MOODY of the Royal Engineers, could be identified by its flagstaff. Troops of wild horses were observed while coming up the Sound. When a boat returned from the shore with a copy of the Navy List, McCormick was disappointed to find that the senior medical officers alone had not been promoted, despite their extra duties in natural history. 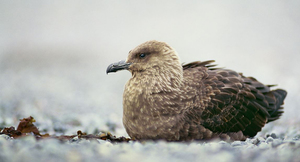 He spent his time while in the Islands in shooting excursions mainly along the coast of Berkeley Sound, each day being described in his book and his bag listed. He sometimes left the ships in what he calls a sealskin punt, observing gauchos lassoing wild cattle with the bolas*. At Urania Bay he shot three caracara hawks, which had been watching his proceedings 'at a respectful distance, with the intent of making my geese their prize'. The birds were shot for the collection. He had to cache the skin boat that day well above high water mark because of heavy squalls and snow, but on returning in a whale boat with two hands to take it back, found it had disappeared, together with his game.

On 31 May, he walked back from Johnson's Harbour, across a desolate landscape, which he described in these words:

The whole of the low grounds, with the ridge of hills bounding them to the north, presented the most dreary aspect, with the stillness and silence of death, there being nothing to relieve the eye from the white mantle of snow which enveloped the whole, and rendered travelling most laborious work, sinking at every step mid-leg deep in snow, amongst long grass, bushes, and other vegetation, passing on my way a small pond or two frozen over. 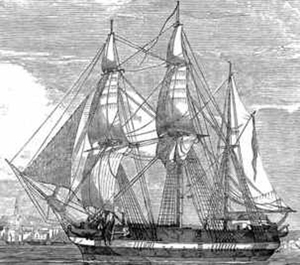 In early July, McCormick joined a ship's shooting party, which returned with twelve head of wild cattle. He gives quite a dramatic account of this.

The missionary Captain Allen GARDINER had arrived early in the visit in a schooner. In August he asked McCormick to see his little daughter who was unwell. At the end of that month, McCormick reported that McMurdo, the first lieutenant of Terror was being invalided home with an internal complaint. The Erebus and Terror sailed for Cape Horn on 8 September 1842 and returned to the Falklands on 13 November for a short stay. During this time, McCormick shot more bird specimens and collected eggs, also taking note of the vegetation and geology of the islands. The ships departed for their third and last southern voyage on 17 December 1842. On the decks were sheep, calves, wild pigs, turkeys, a goose and a wild colt, which was thoughtlessly shot by a party of midshipmen, much to McCormick's dismay at the killing of one of 'the beautiful wild creatures' he had so often encountered on his rambles.

One of the most uncommon books in polar literature is McCormick's two volume work written at the end of his career in the Navy and published in 1884. It has a very long title:

Voyages of discovery in the Arctic and Antarctic seas, and round the World: being personal narratives of attempts to reach the North and South Poles: and of an open-boat expedition up Wellington Channel in search of Sir John Franklin and Her Majesty's Ships "Erebus" and "Terror" in Her Majesty's Boat "Forlorn Hope", under the command of the author to which are added an autobiography, appendix, portraits, maps and numerous illustrations.

This is packed with all the details of his life, even devoting pages to a tame duck which lived in his house. Numerous illustrations by the author, some folding, appear in Voyages, but none of the Falklands. His portrait forms the frontispiece to the first volume, while his sketch of McCormick Bay (in the Arctic) appears in Vol. 2. The pencil originals of many of his sketches were sold at Christie's, London on 25 September 2002 and are in private hands. There is therefore no shortage of biographical information about this naval surgeon. In addition, we have a critical account of McCormick's career and his personality by AGE Jones, in the Geographical Journal for 1982, written in part from McCormick's personal papers in the Wellcome Institute, London. Jones's verdict was that McCormick held himself in high regard, but never reached great eminence. Another author, JJ Keevil more kindly calls him 'the Stormy Petrel of naval medicine'.

See:  The papers of Robert McCormick - held at the Wellcome Library

See:  The papers of Robert McCormick - held in the National Archives of New Zealand

Robert McCormick; Voyages of discovery in the Arctic and Antarctic seas, and round the World: being personal narratives of attempts to reach the North and South Poles: and of an open-boat expedition up Wellington Channel in search of Sir John Franklin and Her Majesty's Ships "Erebus" and "Terror" in Her Majesty's Boat "Forlorn Hope", under the command of the author to which are added an autobiography, appendix, portraits, maps and numerous illustrations; Sampson Low, Marston, Searle and Rivington; London; 1884