botanist, was born in Barnard Castle, Co Durham on 26 July, 1933, eldest son of Moresby George Moore and his wife Elizabeth Moore, née Grange. On leaving Barnard Castle School he studied at University College, University of Durham, where he was awarded a BSc (1954), PhD (1957) and DSc (1984). In 1957 he married Ida Elizabeth Shaw: they had two children: Wayne Peter (b1961) and Lloyd Randal (b1969). In 1958, he served as Research Officer in the Genetics Section, CSIRO, Canberra and went with ANARE to Macquarie Island. From 1959 to 1961 he was Research Botanist at UCLA, in the United States. During an expedition to Chile (October 1960 — February 1961) he spent time in Tierra del Fuego and because of his circum-Antarctic botanical interests, this led inevitably to the Falkland Islands 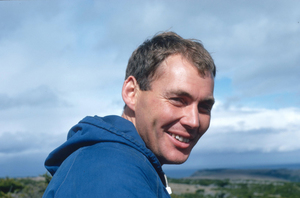 244 Botanist in the Falklands and Tierra...

On 5 January 1964 he reached Stanley on board the Kista Dan in the company of Sir Vivian FUCHS, director of the British Antarctic Survey. There he was met by Ian and Irene STRANGE, his hosts for the next 10 days when he made extensive plant collections in the area, as well as dining with Governor ARROWSMITH, and giving radio interviews. On 15 January he flew to Darwin, staying with Mike and Vicki Mussons at the school near Fish Creek. From this base he collected on and around Mount Usborne and into northern Lafonia and dined with the legendary Tom GILRUTH.

From Darwin he went to San Carlos where, from 23-27 January, he was looked after by Chris and Marguerite BONNER and collected widely in the area. He then flew to Port Stephens and Mike and Margaret Shaw enabled his access to the botanically fascinating south west part of West Falkland. Walking over much of the camp, he bivouacked at the Cape Meredith Shanty (accompanied by a host of mice and rats) and stayed with the Hansens at Hoste Inlet. Ten Shilling Bay peninsula proved a botanical treasure trove; Nastanthus falklandicus, belonging to the Calyceraceae, a plant family formerly only known from the Andes, and Plantago moorei, with its closest relatives in Tasmania, grew with high mountain plants not seen near sea level in the last century and a half. 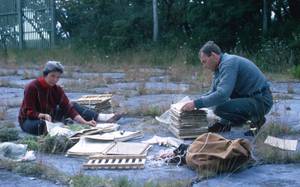 On to Hill Cove, where Bill BLAKE facilitated his work on and around Mount Adam. Then, on 17 February, Moore flew to Westpoint Island to stay with Roddy and Lilly Napier and learn much about the endemic Calandrinia feltonii, which grew in their garden but was apparently extinct elsewhere. After four days, he returned to Stanley, leaving aboard Darwin on 2 March.

Arriving in Montevideo on 6 March he flew to southern Argentina and Chile, which were to be the focus of his work in Patagonia and Tierra del Fuego for very many years thereafter, before returning to England on 5 April 1964. Moore was a lecturer at the University of Leicester from 1961-1968 and then moved to the University of Reading, where he became Reader in Plant Taxonomy and then (from 1976 -1994) Professor of Botany. He is now Professor emeritus and the author of 22 books (including The Vascular Flora of the Falkland Islands, (BAS 1968) and over 90 scientific papers. He is commemorated by the plant-name Plantago moorei, and by two hills in Tierra del Fuego - Monte Moore and Cerro Moore. 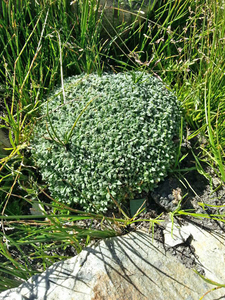 The first specimen of Plantago moorei...

Forming low cushions of densely packed hairy leaves, Moore's plantain survives the harsh drying winds, cool temperatures and strong ultraviolet light prevailing in the Falkland Islands. Moore's plantain is one of the 13 species of flowering plants and ferns endemic (unique) to the Falkland Islands. It grows in a very restricted area and is well-adapted to its harsh environment.

Moore's plantain is restricted to the south-west coast of West Falkland. The coastline around Port Stephens has recently been identified as an Important Plant Area (IPA) because it contains over 95% of the world's population of Moore's plantain, together with a significant proportion of the world population's of false plantain  (Nastanthus falklandicus , family Calyceraceae), which is also restricted to the south-western Falkland Islands. 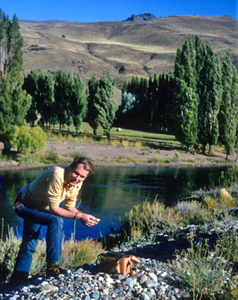 Plantago moorei forms low cushions or large hummocks up to 1.5 m in diameter and 23 cm high, made up of densely branched stems bearing tightly packed rosettes of leaves. Coarse white hairs cover the upper surface of the thick, grey leaves. The leaves are up to 13 mm long and 3.6 mm wide. The tiny flowers are borne in pairs and are protected by two hooded bracts (modified leaves).

Current major threats to Moore's plantain are trampling by grazing livestock, fire (caused accidentally by humans or by lightning strikes) and storms, which accelerate the erosion of its habitat. The rapid spread of invasive mouse-ear hawkweed (Pilosella officinarum) could cause severe problems for Plantago moorei if not controlled.