sculptor and engraver, was born at Westminster, in London, on 8 October 1874, the son of Walter Ransom, a builder. He studied at the Lambeth School of Art and the Royal Academy School and lived and worked in London all his life. In 1903 Ransom won the prestigious Landseer Scholarship and exhibited at the Royal Academy. In 1910 the London County Council commissioned Ransom to design a school attendance medal. Ransom's design was used for the medals awarded after 1914 which depicted a likeness of King GEORGE V, and these medals have become known as the 'King's Medals'. The King particularly approved of Ransom's work, and he was received at a private audience at Buckingham Palace on 4 February 1911. Ransom was also responsible for the notable war memorials of Portrush (Co Antrim) and Hove (Sussex).

Ransom was an instructor at the Clerkenwell and Hammersmith School of Art. He was also a friend and personal assistant to the eminent sculptor Sir George Frampton RA (1860-1928) for more than twenty years. Frampton is probably best known for his bronze statue of Peter Pan which stands in Kensington Gardens, London.

On 8 December 1914 the German East Asiatic Fleet was destroyed by a British Cruiser Squadron, under the command of Admiral STURDEE, in the Battle of the Falkland Islands. After such a narrow escape from foreign invasion, it is small wonder that some desired to build a lasting monument to the Battle. The driving force behind the financing and construction of the Battle Monument was FE COBB, the managing director of the Falkland Islands Company. 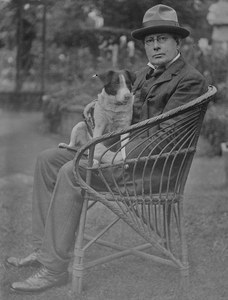 In September 1920, Cobb approached Sir George Frampton about a possible design for a monument that was more than merely an obelisk. Frampton however nominated Frank Ransom as the person who should be commissioned to design the monument which was constructed in Frampton's studios. 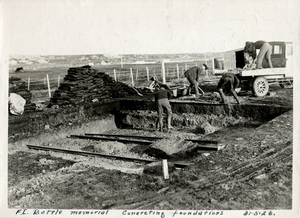 Building the base of the Battle...

Various locations for the monument were considered and the local committee proposed that the monument be erected in the centre of Victory Green, at the junction of Ross Road and Villiers Street. Ransom strongly objected, writing on 30 March 1925:

After due consideration with Sir George Frampton, I have come to the conclusion that the site proposed, in the centre of Victory Green, is not the best that could be chosen. My reasons are as follows. The Memorial would be below the level of the road, and lose in dignity in consequence. There would not be sufficient space between the Memorial and the sea wall to get a proper perspective of the front view; it would be difficult to approach, owing to the necessary steepness of the steps. 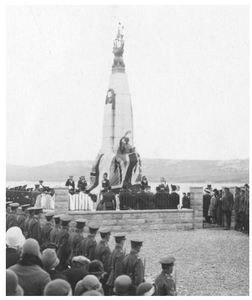 The London-based Memorial fund committee supported Ransom but the Stanley committee strongly disagreed. Progress on the project was halted.

In 1926 the project was revived after gaining the strong support of Governor MIDDLETON. Cobb wrote to the governor, and also to the colonial secretary (H HENNIKER HEATON) 'I know how keen you are to see a start made with the erection of the Monument'. The colonial engineer, George ROBERTS, was placed in charge of the project and drew up the installation plans and costings. At the suggestion of the governor, the monument was to be placed at the western end of the town - the site of the old quarantine station (locally known as 'Little Italy'). Roberts supervised the clearing and improvement of the site.

In early 1926 the Cornish granite blocks of the monument were unloaded at Sulivan Jetty and transported to the site using a light railway which was laid for the purpose. Some of the rails were subsequently used as reinforcement bars in the construction of the base. The individual blocks weighed over two tons. The foundation was begun in May 1926, and work was completed on 22 July 1926, with the statue of Victory bearing Ransom's signature. On 26 February 1927 the 1914 Battle Monument was officially unveiled; a public holiday was declared and there were three days of celebrations. On 3 May 1927 - nearly ten years after he had first proposed the erection of a monument - FE Cobb wrote to the under secretary of state at the Colonial Office offering the Battle Monument to the colonial government: 'to be held in perpetuity as a record of the victory of the British Fleet and of the deliverance of the Colony from the peril that threatened it'. 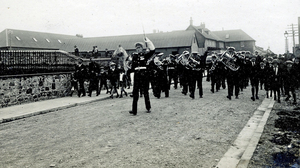 Boy's Brigade Band marching past the...