civil servant, was born at Stanley on 8 October 1884, the eighth child of William Binnie, journeyman tailor and his wife Marion, née Pope, originally from Lanarkshire. The Binnie children were brought up to be self-sufficient and under the guidance of their father made their own confirmation suits. Edward Binnie joined the Falkland Islands Volunteer Corps and probably entered government service on a temporary basis when he was about 15. In November 1907 he was tasked to accompany the whaling fleet of the Sociedad Ballenera de Magallanes (Magallanes Whaling Company) to the Antarctic as a customs officer, beginning a lifelong association with the whaling fleet, and the Norwegian seafarers who manned it. His diary of his period at Deception Island in the South Shetlands notes apprehending a Norwegian master who failed to produce a whaling licence, an act which earned Binnie a commendation from Governor ALLARDYCE 'for his vigilance in protecting Government interests'. While at Deception, Binnie showed prowess with the camera, an interest which he developed throughout his life, and to which Antarctic historians are now indebted. On his return to Stanley in March 1908, Binnie resumed postal and customs duties until July 1910, when he was appointed deputy collector of customs, deputy postmaster, deputy shipping master and receiver of goose beaks at New Island, West Falkland, where Christian Salvesen & Co had opened a whaling station. 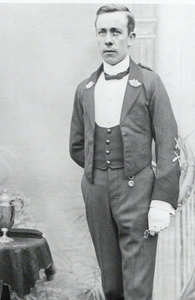 38 Edward Binnie in his Falkland...

His next appointment was at South Georgia, to relieve the magistrate James Innes WILSON. On 31 August, Binnie arrived at Grytviken and took up residence in the Little Villa, which had been built specifically to house the magistrate and policeman. He established good relations with the PESCA manager, Captain CA LARSEN, dining in the manager's house with his family.

In 1911 the South Georgia whaling boom was at its zenith and it was also the period of the 'heroic age of Antarctic exploration'. In December 1911 the German expedition under Wilhelm FILCHNER called at South Georgia. Binnie later recalled that he ran out of postage stamps and had to improvise by making a 'Paid at South Georgia' handstamp, inserting the amount of postage. He again showed his skill with the camera, taking many outstanding images which were made into postcards and sold at the Binnie family's 'Orchid Store' in Stanley. In March 1912, he returned to Stanley and was employed on clerical duties in the Treasury. He also undertook a short tour of duty to West Falkland in a small mail boat, the Columbus, to investigate rumours of 'smuggling and the evasion of duty'. 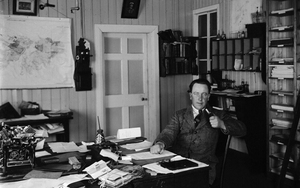 In October 1912, Binnie was appointed magistrate, postmaster and coroner for the South Shetland Islands and Graham's Land, thereby becoming the first 'Antarctic Magistrate', at a salary of £200 per annum. He took passage on the Norwegian factory ship Hektoria, belonging to the company A/S Hektor, who were intent on establishing a whaling station at Port Foster, Deception Island, which had been notified as a 'Port of Entry' earlier that year. Binnie took with him a number of postage stamps which he overprinted with the words 'Port Foster' and sold to the whaling crews. These, he later claimed, were 'the rarest stamps of the Falkland Islands as the Port Foster frank was never used again'.

Binnie returned to Stanley in May 1913, assuming duties as acting postmaster and stipendiary magistrate. In July 1914 he was appointed magistrate at South Georgia and arrived on 26 August, bringing the first news of the War. He lived in the Norwegian style magistrate's house at King Edward Point. In November 1914, Sir Ernest SHACKLETON arrived with his Imperial Trans-Antarctic Expedition on board Endurance. Sir Ernest spent one month at South Georgia where with Binnie's support he obtained supplies and coal from the whaling companies while he waited to give time for the ice to disperse. They met up again in 1916 when Shackleton trekked across the South Georgia mountains following his daring voyage from Elephant Island. 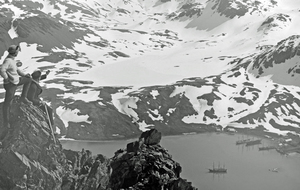 After the war, Binnie remained at South Georgia but in March 1921 he was granted compassionate leave as his father was ill and subsequently died. He was appointed temporarily colonial postmaster and magistrate at Stanley so that he could support his mother and family but in December he returned to South Georgia. He was very much a conservationist and made some very astute observations on the whaling and sealing industries which he transmitted to the Falkland Islands Government and the Discovery Committee.

Shackleton returned to South Georgia in his ship Quest but died in King Edward Cove on 5 January 1922. His body was sent to England, but when it arrived at Montevideo it was returned to South Georgia following the wishes of his family. The funeral service was conducted half in Norwegian and half in English, with Binnie, as magistrate, officiating for the second part. 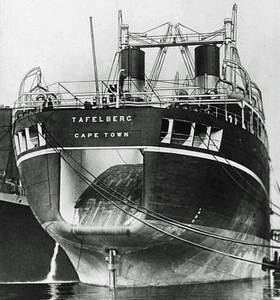 Binnie was a creative and sociable person who had built up a substantial amount of leave at South Georgia. In May 1923 the opportunity arose for a trip to Norway; it was a journey that changed his life. While he was at Sandefjord, the ship's home port, he met a 24 year-old Norwegian, Margrethe Olaug Larsen, and on 17 October 1923 married her in Oslo. They had four children: Elsa Margrethe (born in Stanley 1924), Sonja (born at King Edward Point in 1926), Haldis Beryl (born in Norway 1928) and Thomas Edward, (born in Norway 1933).

After a honeymoon in Paris and London, Binnie and his wife returned to the Falklands and he resumed duties at Stanley in January 1924. In late 1925 he returned to South Georgia with his family, taking up residence at the new Magistrate's House. They remained at South Georgia until March 1927, when Binnie took leave to visit Norway. He had been offered a senior post at Stanley, but on 14 October 1928 he resigned from government service, and settled at his wife's family home in Sandefjord. 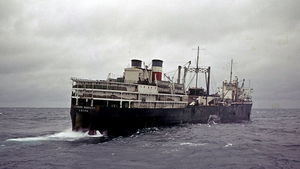 It was difficult for 'foreign' subjects to find employment in Norway, but in 1929 he was engaged as ship's secretary on board a factory ship, the Anglo-Norse. During his periods at 'home' in Sandefjord from May through to October, he stayed with his wife's family, and enjoyed cooking, woodworking and his passion for cars. After the crisis in the whaling industry 1931/32, Binnie joined a South African ship Tafelberg, and served on her until 1941, when she was mined in the Bristol Channel. For the rest of World War II Binnie lived in London, working with Nortraship, the Norwegian Shipping and Trade Mission in the City. He rented rooms and was bombed out twice. At the end of hostilities he was repatriated to Norway, but the stress of war had taken its toll on him.

In autumn 1945 he became secretary in the British whale factory ship Empire Venture, moving to the Christian Salvesen factory Southern Harvester for her maiden voyage to South Georgia and the Antarctic 1946/47, where he was able to renew old acquaintances. But during the voyage he fell and badly damaged his leg, which forced him to retire from the sea. Thereafter he undertook small private commissions at home and participated in family life. Binnie died at Sandefjord on 26 June 1956.

See:  Shetland Times  (August 2007) - for the history of the ship Tafelberg/Empire Heritage