senior chaplain, was born in Portsmouth on 11 March 1936, the son of a Falkland Islands mother, Beatrice Orissa Bender and of William Robert Millam who had served with the Royal Navy in the Islands from 1921-2. He was educated at Bromley County GS and later at Cheltenham GS and went on to St David's College, Lampeter and Ridley Hall, Cambridge. After three years teaching in Birmingham, he was ordained priest in 1964. 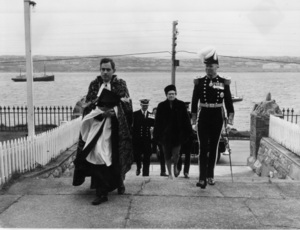 Millam was steeped in Falkland Islands lore as a child and met frequent guests from the Islands, so when the opportunity came to serve as senior chaplain at Christ Church Cathedral Stanley it was as if a local boy had made good. He hit the world's headlines in September, 1966, shortly after arriving, when he, later joined by Fr ROEL, successfully dealt with the 18 armed hijackers of the CONDOR Group who had taken hostages aboard the Aerolinas Argentinas DC4 plane forced to land on Stanley Racecourse. When negotiating the release of women and children, Millam managed to smuggle Terry PECK, the chief of police, on to a departing Landrover under his clerical cloak. Following this incident, Millam, with the tabernacle minister (Rev Paul CHARMAN,) invited the Rev Dr Arnoldo Canclini, a prominent Baptist Argentine historian, to the Islands and Dr Canclini preached in both the Cathedral (on 28 May 1967) and the Tabernacle, the first Argentine national to do so.

When Lord CHALFONT visited the Islands in October 1968 the Millams were asked to entertain him at the Deanery, where Chalfont expected Millam, as an 'expatriate' to support the British Government's proposals for closer involvement with Argentina. But Chalfont left disillusioned as the Millams unequivocally sided with all Falkland Islanders in their efforts to remain British. 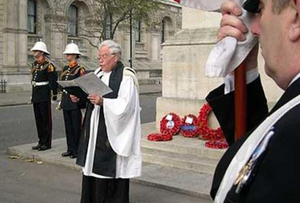 For the Cathedral's 75th Anniversary (21 February 1967) Millam planned celebrations with a Souvenir Brochure and Service of Thanksgiving. Together with WH THOMPSON (colonial secretary) he mounted an exhibition of the Colony's history in the Town Hall. The Cathedral was floodlit for the first time in history. Millam organised the celebrations to mark the centenary of the consecration of Bishop STIRLING as first Bishop of the Falkland Islands, on 21 December 1969, with a four-set commemorative stamp issue, centenary covers and the first ever over-printed aerogramme. The postmaster agreed on a special frank which Millam designed for letters posted in the Cathedral postbox, the first such authorised postbox not on government property in the Islands' philatelic history. With Alma Draycott, Millam ran the FIBS Newsletter from 1967-70, and was frequently called upon to make announcements, a significant one in May 1970 being a request for mattresses to plug the hole in the side of the Great Britain until quick-setting concrete took effect. With the help of naval and BAS personnel he restored the Cathedral clock chimes which had been silent for 21 years, resulting in many gifts of broken clocks for repair and sale at the Cathedral Bazaar.

Millam undertook extensive Camp visiting by Landrover, Beaver seaplane, boats, horseback and foot, including a visit to Keppel Island. Services were held in all settlements with occasional baptisms and weddings, and prayers said in most outside houses during his stay. He also visited South Georgia in 1967 and said prayers at Sir Ernest SHACKLETON's graveside, and by request, conducted a service in Grytviken church. As chaplain to the Supreme Court and the nearest thing to a trained social worker, the acting judge, WH Thompson, occasionally adjourned cases to the Deanery if he thought 'the Padre' with agreement of the parties concerned could resolve matters (usually of a domestic nature). Close ecumenical relations were formed in his time with the Week of Prayer for Christian Unity being observed by all three churches for the first time in 1968. With D'Earle DRAYCOTT, (superintendent of education,) Millam advised on the establishment of a Falkland Islands school boarding house in Montevideo and visited it during mid-term leave in 1968. In March 1968, at the request of Len Hill (of Birdland, Gloucestershire), supported by Peter SCOTT, he exported 60 penguins to England with only one dying in transit.

Returning to England in June 1970, Millam was a founder member of the United Kingdom Falkland Islands Committee (1972) and became its welfare representative. He was the first person to broadcast to the Islands on the BBC World Service in April 1982, and read the second lesson at Falkland Islands Evensong in St. Paul's Cathedral on the following Palm Sunday. He spoke to a packed audience of Lords and Commons to emphasise the sacrifice Falkland Islanders had made in the defence of Britain. Millam has tirelessly fought the Islanders' cause in the media and in committee and with Bill Hunter CHRISTIE was instrumental in obtaining Britain citizenship and UK Right of Abode for Falkland Islanders.

He was vicar of Pulloxhill with Flitton, 1970-79; St Paul's, Luton, 1979-89; and Chipping Campden with Ebrington, 1989-94 where he was a founder member of Chipping Campden Rotary Club.  In 1992 he was chaplain to the high sheriff of Gloucestershire and, in retirement, a member of Chichester Community Health Council. As a hymn writer one of his hymns, 'O they that go to sea in ships', was broadcast on BBC on Sea Sunday, 1996.