authority on hill farming, was born on 1 August 1900 at Little Blencow Farm, Greystoke in Cumberland into a farming family.

His father was Thomas Wannop and his mother Esther Ann Robson. Thomas Wannop was a leading agriculturalist and innovator. After school in Penrith Arthur Wannop went to Liverpool University and read engineering (BEng); he then took a second degree in agriculture at Aberdeen (BSc). 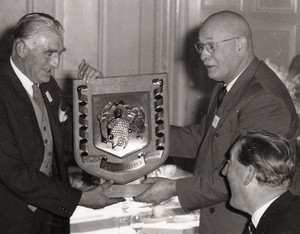 He worked in the educational and advisory service in Scotland from 1922 to 1932. On 19 December he married Helann Wyse, and they had three children - Urlan, (who as Professor Urlan Alistair Wannop, of Strathclyde University, was awarded the OBE in 1999 for services to the Boundary Commission for Scotland), Ann and Ewen.

After three years in Northumberland, Wannop returned to Scotland (working at the North of Scotland College of Agriculture in Aberdeen) and he joined the Department of Agriculture for Scotland in January 1948. He was awarded the OBE in 1946 and appointed the first director of the newly formed Hill Farming Research Organisation in 1953. In 1952 Wannop was elected as a Fellow of the Royal Society of Scotland (FRSE). 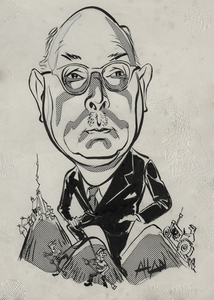 A family caricature of Arthur...

Governor ARROWSMITH wrote in October 1957 to the Colonial Office asking for a pasture specialist, with hill farming experience, to be sent to the Falkland Islands to advise the farmers. 'We need a sort of pastoral Billy Graham!' wrote the governor, and through the influence of Sir Anthony HURD, Wannop was asked to visit the Falkland Islands and to write a report.

Wannop arrived in RMS Darwin on 31 October 1960; to tour East and West Falkland, leaving on 12 January 1961. The Wannop Report of 1961 was one of a succession of reports (e.g. MUNRO 1924; DAVIES 1938; GIBBS 1946; GUILLEBAUD 1967; ODA 1969; Theophilus 1972; SHACKLETON 1976) written between the 1920s and the 1970s about the future of the sheep farming industry of the Islands. Wannop's overall assessment revealed a familiar pattern: the total number of sheep appeared to be still declining, though less rapidly than formerly, from the peak of 1898. The sheep husbandry system continued to be extensive grazing - 'an extractive form of farming'. The incentive to improve settlement fields was not great. Wannop clearly understood that the improvement of Camp was a difficult undertaking under the Falkland Islands' climatic and geographical conditions. Although everyone agreed that lime and fertilisers would be beneficial for selected areas of farmland, little was used because of the cost. He pointed to Roy Cove farm as model of what could be achieved but believed camp improvement was unlikely really to succeed unless combined with some grazing control which meant more fencing. To alternate grazing and rest periods not only prolonged the effectiveness of grazing but could actually lead to rejuvenation. 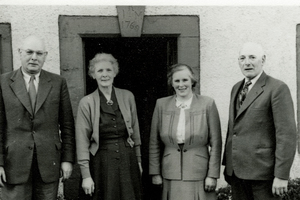 Wannop concluded by encouraging government to appoint a scientific officer to investigate potential improvements in soil and grassland fertility - a post in due course filled by CD YOUNG. After Arthur Wannop's departure from the Falkland Islands the Monthly Review commented: 'Mr Wannop's visit has been an unqualified success from all points of view. The farmers have been most grateful and appreciative of Mr Wannop's interest in their problems'.

In an Appreciation that appeared in the Annual Report of the Hill Farming Research Organisation, Professor S J Watson CBE wrote:

Arthur Wannop used to say that he was not a scientist, an attitude that was unfair to the man himself. He did see the problems, could plan the husbandry experiments and knew where the scientific work fitted in, and that was what was required … In looking at the man himself, one is struck by his great and abiding interest in the young people in agriculture. Throughout his life he was a power in the Young Farmers' Club movement and gave up much of his spare time furthering its aims … He was a man of wide interests, but most of his time was devoted to agriculture which, to the deeply involved person, becomes a hard master; time consuming but always deeply rewarding. This involvement with his chosen profession Arthur Wannop never lost.

See: The Wannops of Border Country